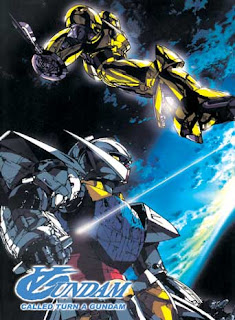 Easily one of the strangest yet most creative Gundam series released to date, Turn A Gundam takes place in a timeline known as the Correct Century. The series takes place thousands of years in the future after all of the galaxy’s technology has been wiped out. After much labor, the humans living on Earth have managed to achieve a level of technology similar to that around the time of World War I.

However, there is a society of humans living on the moon who wish to return to planet Earth. To make certain that a return to Earth is even feasible, queen Dianna Soriel sends three spies down to the planet. Fran Doll, Keith Laijie, and Loran Cehack secretly become a part of the Earth population, taking up the roles of a news photographer, baker, and personal assistant respectively. Loran finds himself the assistant of the rich Heim family, and spends much of his time with their two daughters Sochie and Kihel. Sochie and Loran play off of each other as a quarreling brother-sister type duo, but Kihel seems constantly distanced from them, as if her mind is focused on something else.

After a few years, Sochie and Loran are both old enough to participate in a coming of age ceremony in front of a statue known as White Doll. As the ceremony commences, Guin Lineford is in the nearby city of Nocis, explaining to Kihel that some of the earth-dwellers have been in talks with the moonrace for years about their return, though no agreement has been reached. Suddenly, a number of mobile suits attack Nocis. In the heat of the battle, White Doll crumbles, revealing a mobile suit inside, known as the Turn A Gundam. Loran and Sochie jump inside the cockpit and head towards the city to try and fight off the invaders. 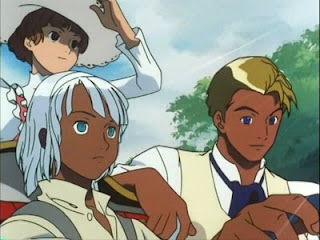 Following a brief skirmish, a ceasefire is ordered, and Guin Lineford and Dianna Soriel sit down to talk about allocating a portion of the Earth for a moonrace-exclusive nation. Shortly thereafter, Dianna Soriel and Kihel decide it would be entertaining if they were to switch roles for the day. However, the two get more than either bargained for, as Dianna is requested to return to her ship. Kihel is then whisked away, with the moonrace under the impression that she is in fact their queen Dianna Soriel.

As the series progresses, more information is revealed about the dark history that preceded the events of Turn A Gundam. Countless mobile suits are uncovered in the mountains near Nocis and other areas across the Earth, the majority of these being Kapools and Borjarnon. Many of the mobile suits that appear in the series are nods to mecha from previous Gundam series, including the original Mobile Suit Gundam and ZZ Gundam. Others, such as the Turn A Gundam, WaDom, and Mahiroo are completely new mobile suit designs. A first (and so far only) occurrence in a Gundam series, many of the mobile suits were designed by Syd Mead, an American industrial designer who previously worked on the films Tron, Blade Runner, and Short Circuit. 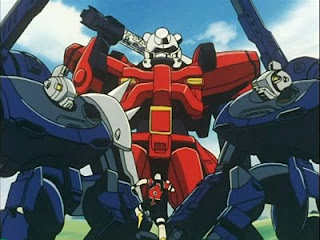 Clocking in at fifty episodes, Turn A Gundam does a brilliant job of filling the time allotted with exciting battle sequences and plenty of plot development Though the series can be a bit slow going at first, it pays off in the end. There are no “filler” episodes in Turn A Gundam, a welcome break from some of its brethren series. Every event that occurs has a purpose in the overarching story. Towards the end of the series, there are a few major plot twists that send the story in a completely unexpected direction, but prevents things from being totally thrown off course. The finale is very fitting, albeit the fact that it is somewhat bittersweet for the characters.

The single aspect in which Turn A Gundam best surpasses other Gundam and mecha series is the character development. Loran Cehack is possibly the most multi-layered Gundam pilot to date, constantly wrestling with his moonrace heritage and duty to the Earth militia. Loran manages to keep his cool, only releasing his anger and frustration when in battle. Though still relatively young in comparison to most of the other characters in the series, Loran carries himself as one of the most mature and understanding characters in Gundam history.

Likewise, Dianna Soriel comes to terms with her past while posing as Kihel. During her travels with Loran and Sochie, Dianna gains a greater respect for the common folk. She witnesses first-hand the destruction that the mobile suits can cause, and spends much of the first 25 episodes re-evaluating herself as a leader. 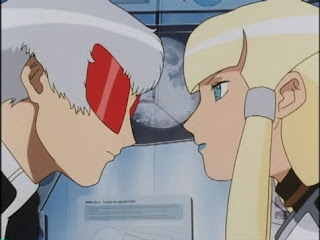 Even Gym Gingham, who does not appear until late in the series, breaks the mold of the traditional lead villain. Though he does become a bit power-hungry near the finale, Gingham does an excellent job of carefully calculating his plan of attack and his methods of persuasion. He comes very close to overthrowing Dianna Soriel’s regime, going so far as to plant agents on Earth to both spy on her, as well as create sympathy for his own movement.

From Guin Lineford and Harry Ord, to Lieutenant Poe and Agripp Maintainer, no character is included without an important role. Although there are a few such as Bruno and Jacob who fit more traditional and arguably stereotypical roles, they are still involved enough in the story that they do not come across as boring.

The art style of Turn A Gundam is full of bright colors and detailed environments. Everything from the forests of Earth to the artificial ocean on the moon breathes life. There are fewer battle sequences than in most Gundam series, but when they do occur the animation is flawless and the fights themselves are both creative and brilliantly executed. The soundtrack of Turn A Gundam is beautifully orchestrated and each piece fits perfectly to its respective scene. The opening theme may be a bit silly by today’s standards, but both ending theme songs, “Aura” and “Moon” are nothing shy of epic.

Turn A Gundam is a far cry from most other Gundam series. It has fewer battle sequences and the tense air is absent for a large portion of the series. However, it makes up for these by putting greater emphasis on complex characters and brilliant storytelling. The positive mood that the series conveys puts a large focus on the theme of growing up and of hope for a peaceful future. Although not one of the most popular Gundam series, Turn A Gundam is easily one of the most creative and - in my opinion - one of the best mecha series ever conceived.